How The Defined Jaw Replaced The High Cheekbones As Beauty’s Most-Wanted.

Vogue reports how over the years there has been so much fuss over bee stung lips and plump cheeks that other areas of the face have had much less airtime.

We applaud this article as a leading non-surgical clinic in the UK of advanced injectors, as we know how important it is to restore a sleek, feminine jawline for women and a more chiselled jawline for men. It also reported that 67% of people surveyed were bothered by the excess fat around the chin and upper neck. The American Society for Dermatological Surgery carried out the study. It was also mentioned how the influences of the selfie and being snapped from all angles was another contributing factor.

Dr Tracy Mountford was quoted as saying; “men are after a more chiselled and stronger looking jawline, while women want theirs to be delicate and firm.”

Another gold standard jawline treatment was Ultherapy. Dr Mountford stated in the article “Ultherapy combined with Juvederm Volux can lift, redefine and sculpt even the weakest of chins and jawlines.”

The Cosmetic Skin Clinic has been awarded the number one Ultherapy clinic in the UK for the sixth consecutive year. 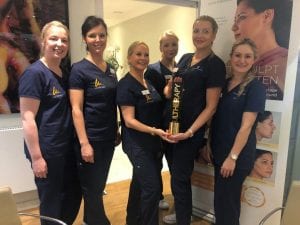 Dr Mountford also went on to say, “in my clinic we combine Ultherapy with CoolSculpting to redefine the jawline by freezing the fat pad just underneath the chin. We can then sculpt and strengthen the jawline with dermal fillers such as Juvederm Volux to add definition and structure to where it is needed most.”

Those small yet troublesome areas of excess fat on our bodies, such as bra fat and fat on inner arms and knees have been, until now, notoriously difficult areas to treat. And no matter how much you diet, it can seem almost impossible to lose a double chin.

Juvéderm® Volux is the latest evolution in dermal fillers for those seeking a more sculpted and defined jawline and chin.

We are the Number One clinic for CoolSculpting® in the UK with over 50,000 treatments to date and 20 years’ experience.

‘No1 Ultherapy Clinic in the UK’ for the 8th consecutive year