Make-up artist Tina Young, 53, tried Ultherapy, an ultrasound skin-tightening and lifting treatment at The Cosmetic Skin Clinic, to give her skin a boost, making her look almost ten years younger.

For a long while, I was apprehensive about altering my face in any way. As a make-up artist, I’ve worked with a lot of models, actors and actresses, people who have had all sorts of procedures to enhance their physical appearance, but I’ve always been a little bit scared of taking that leap. You hear all sorts of stories, about people who have regrets of procedures that were too much or overdone.

I really only knew about the knife, which was not something I would consider. It felt too risky. There was also injectable treatments, but I didn’t really feel I was ready for that yet either.

At the same time, I am 53. There were days when I’d pull back on my face, just a little, while looking in the mirror and think, ‘Oh, that would be nice.’ Many of you will know what I mean.

I was working on a photoshoot when the opportunity to try it out came up. Actually, I hadn’t even heard of it prior to the shoot. I was doing the make up for some ladies who would shortly be going through the process themselves. They were discussing it the whole time I’d been doing their make up. I was hearing things like ‘oh it’s amazing!’ and ‘It looks so good’ and really piqued my interest. When I was called back for the next shoot, the person in charge said to me that one of the patient case studies couldn’t make it that day, so I immediately put myself forward. The first step though, was to have a full medical consultation to assess my suitability.

Ultherapy is the only FDA-cleared, non-invasive treatment for lifting and tightening the skin on the face and neck, which is reassuring.

My consultation was at The Cosmetic Skin Clinic in London, everybody was so kind and caring, I felt like I was in excellent hands. During my first visit, once they explained the treatment process, what to expect and how long it takes and when I was likely to see the results, it didn’t sound too bad at all.

How does Ultherapy work?

They explained that they would be using a medical device to deliver high-intensity waves of Micro-Focused Ultrasound with Visualisation (MFU-V) which delivers the energy to the depth of skin targeted by surgeons. This is different to regular ultrasound that you might use to see a baby in the womb. The heat stimulates the natural collagen and elastin within your own skin, increasing production, making it smoother and giving it more lift. The Ultherapy gives the collagen a kickstart putting structure back to the skin, which is what gives the skin its youthful bounce and glow.

I’m very sensitive to pain, whenever I have anything done at the dentist, I’ll always opt for pain relief, and this was no different. The medication was really just a step up from paracetamol. It was basically just to take the edge off, and as far as I could tell, it did. I felt perfectly lucid throughout the procedure.

Before the procedure, my practitioner marked up the areas of my face that would be treatment with a lightweight marker pencil, rather like an eyeliner pencil.

She only worked on areas where I needed a boost. As it turned out it wasn’t as much of my face as I thought. The main areas targeted were along the lower part of my face and jawline and the upper cheek area. She didn’t do anything to the skin around my eyes or forehead. The whole thing took approximately one hour.

The procedure itself was a little uncomfortable, was on the lighter side of hot, around 60-70 degrees C, I was told. It felt sort of like having an elastic band snapping against your face. It wasn’t so much painful, as it was a strange sensation.

I was definitely nervous, my practitioner was great; you could just tell she was really experienced; you absolutely feel like you’re in the best of hands.

In fact, everybody at the clinic made me feel that way. The overall atmosphere made it so that if I ever decided to do it again, I wouldn’t be afraid at all. I would certainly recommend it.

Recovering after the Ultherapy treatment

When I left the clinic following the treatment, the sensation I was feeling was nothing major, though I remember my face glowing with a hint of redness. I probably could’ve gone to meet somebody for a meal afterwards and they wouldn’t have noticed. No one stared at, or anything like that. I didn’t have any swelling or bruising or anything. You really, really couldn’t tell. I have been told that some people will experience minimal swelling, but for me that wasn’t the case.

The effect was very gradual which was nice, because no one was thinking: ‘Oh what did she have done?’ People just started commenting that I looked well. No one caught onto the fact that I’d had something done, unless I told them.

They thought I just looked ‘lovely’ for some reason. It was maybe two months before I caught myself having a little stare in the mirror and suddenly felt really pleased with my skin, and from there on, it just kept getting better and better.

Around five months later I bumped into a director that I had worked with over 4 years prior. I was on a train with him and we were chatting, and after about 20 minutes he said, ‘Oh, Tina I just have to say something. You literally look about ten years younger than the last time I saw you.’ I didn’t tell him I’d had anything done. It was totally unprompted, he just happened to say it!

How long does the treatment effect last?

The effects of the treatment should last between twelve to eighteen months. I’m not worried about what will happen when the effects start to fade. It’s not something that’s going to suddenly just wear off overnight. Without a second treatment in a year or two, my collagen production will gradually wind down over time. I’ll age into it naturally. So far, it’s lasted, well over a year – and I don’t feel the need for a top up anytime soon.

I only had one session, but it made me so much more confident. All the compliments have been so lovely. Whenever people find out that I had adult children they’d say thing like ‘wow, how old were you when you had them? You must’ve been a teenager!’

Images show before and results after 6 months. 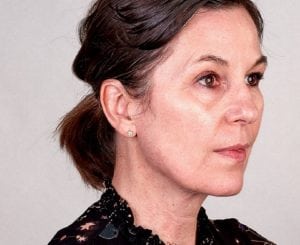 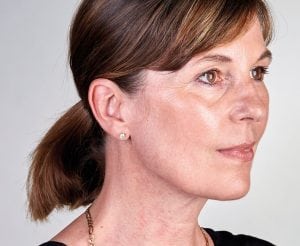 Ultherapy is a bespoke treatment – fees from £1200

The Cosmetic Skin Clinic is the No.1 Ultherapy Ultra Premier Treatment Provider for the UK and Europe for the sixth consecutive year.

Home » Blog » Patient Stories » ‘The skin-tightening treatment that knocked nearly a decade off my face.’